Sunday Firesides: What Would My Best Self Do? 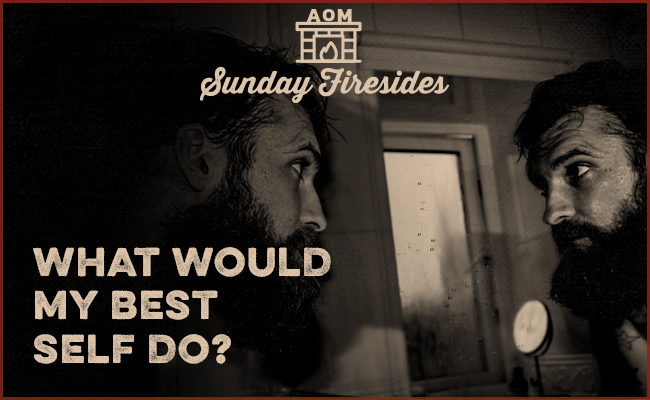 An old friend just died, and his funeral is few states away. You’re thinking about going, but the flights are really expensive, you’re slammed with work this week, and, you know, you hadn’t been in touch with him for a while anyway.

You’ve decided to break up with your girlfriend, and you’re trying to decide whether to tell her in person or just send a text. Doing it face-to-face would be an appreciated gesture, but it’ll probably be super awkward, and the relationship really wasn’t that serious, right?

Even though you’re home from the office, you’ve still got a few emails to answer. Your kid asks you to play a game, and while part of you wants to say yes, another part would instead like to check a few items off your to-do list.

We’re all regularly faced with choices like these. Two options seem equally practical or reasonable, or at least you’ve come up with sufficient justifications to frame them as such, and you can’t decide how to proceed.

Father James Martin offers a very helpful rubric for getting clarity on these kinds of decisions; ask: “What would my best self do?”

This question will often cut through the noise of your irresolution, so that the right choice immediately becomes clear.

You probably have a conception of what your best self looks like. Often you fall short of that ideal, and the gap between who you are now and who you want to be seems yawningly large and impossible to bridge. Fortunately, you don’t have to make that transformation in one heroic leap, but can do so progressively, through small, consistent choices.

Each time you inwardly inquire what your best self would do, and act accordingly, you’ll get closer and closer to actually becoming that person.

The post Sunday Firesides: What Would My Best Self Do? appeared first on The Art of Manliness.

Can drinking alcohol make you more productive (or creative)?

Some ways to get (even more) energy out of caffeine

Latest Trends to Enhance Productivity in the Work Environment